Why are Indians fanatic about cricket? 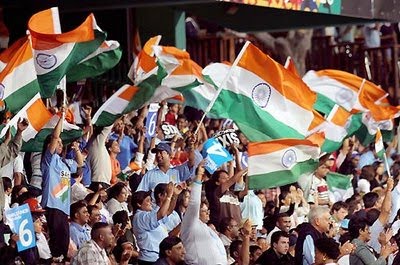 British empire left India in 1947 but their legacy still lingers. Two most prominent aspects of the legacy are proficiency of Indians in english and cricket. Both these things have helped Indians to amass tremendous wealth. British have left but Cricket still rules India.

Cricket is not even considered a game outside non-cricket playing nations. How can you have a game which goes on for 5 days  and yet can possibly end without any side winning the game? Who will like to watch such a game, they wonder.

But Indians definitely a deeper psychological connection with cricket.  Cricketers are best paid sportspersons and brand ambassadors in India. Their houses are considered tourist attraction. Cricket tournaments are like superbowl in US, happy hunting ground for advertisers. IPL tournament changes the entire entertainment landscape. Corporates throng cricket stadiums, movie theatres screen matches and actors, politicians and industrialist make a beeline to watch cricketers in action. Cricket has inspired several movie makers to make cricket-centric movies. They have not only made money but gone up to Oscar nominations riding on popularity of Cricket.

So why are Indians fanatic fans of cricket?

For starters, Each team member is assured a place in limelight irrespective of their credentials and skill levels. No. 11 batsman is not actually a batsman, he should not be given a chance to bat. But in cricket if you are in the team, you get to bat. No matter what, your moments in limelight are assured.

Secondly, Cricket is as much an individual's game as it is a team game. One exceptionally brilliant individual can defeat the entire opponent team.  Laxman is the nemesis of Australian team. In Sharjah, all 11 Indians tried hard but Javed Miandad snatched the victory from jaws of defeat. I can't recall any other team game that empowers the individual so much that he can defeat entire opposition team.

Cricket does not favor any particular particular physical trait. Internationally successful cricketers come in all shapes and sizes. Even players considered obese in any other form of the game have succeeded in cricket. Arjuna Rantunga - Srilankan captain lead the team from front to a world cup victory when he had a prominent oversized tummy.

A common man in India is still not empowered. Daily life is nothing less than a struggle. Special world class traits  are rare, financial wherewithal is absent. Opportunities to perform are denied on the basis of caste, creed, class, religion, language, physical traits. Being in limelight is considered once in a lifetime opportunity.

No wonder the common man has developed a deep psychological connection with game that assures opportunity to perform, offers equal chance of success without any bias and assures moments in limelight no matter what.

They are fanatic because Cricket gives them things that their life can not.