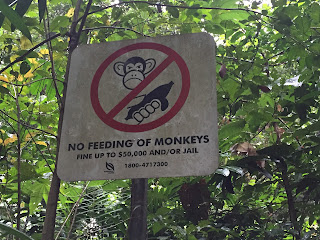 There is a lot you can learn from countries. Every country has a "view of the world" and their policies are designed and governed by them. Nothing right or wrong... Just need to pick­up whatever suits you.

Singapore is famous in the world as "fine" city. Fine is defined for every violations and rules are clearly spelled out everywhere. Even emergency stop for a train comes with a tag of misuse penalty $500. They say as soon as a new rule comes into play people ask, "what is the fine?"
It works very well on most of the occasions. City is well disciplined, clean neat, nice. Over a period of time you get used to "no food or drinks" in public transport so much so that I don't eat or drink even in other cities. But then there are bad times. You often find littering in last train of the day or after a large event like fire works is over. If you sense that you can break the rule and get away, you are tempted.

Singapore's view of the world is to enforce rules, you need to design them well, communicate them well, encourage people to follow and if they don't follow the rules, fine them. Perfectly valid, right?

Even I used to think this is the only way till I travelled around Japan. In Singapore, the onus of enforcing the rule is on police not on people. Japan has a completely different view of the world. Japan runs by norms not by rules. People seek to adhere to socially accepted norms. Thats what runs the society. 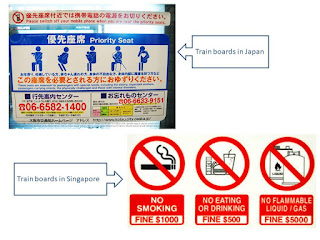 In Japan's public trains the norm is you should not speak on mobile phone. There are boards in the train. But no fine is mentioned. Its just a request. And People just follow it. Once I called my colleague and he got down from the train, spoke to me and got into the next train. Even though there was no fine, no police or no camera to catch him.

If you are leading a team of people, you have decide whether to go Japan way or Singapore way. Shifting the onus of setting and following the rules to the team lowers the cost of following the rules. No policing, monitoring required, team norms ensure adherence. You just have to keep reminding people about the norms. If you choose Singapore way, you need to think through every rule, every loop hole, every corner that can be bent. You need strong network of enforcing and monitoring.

Both ways work. Choose the one that suits you view of the world.