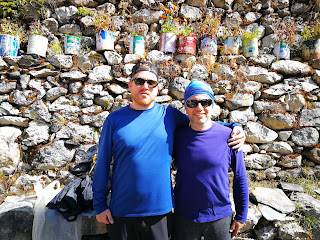 Another set of interesting people I met in my treks are backpackers. Somehow, I am fascinated by them. I always saw them in cities like Bangkok. I would be dressed in business suit, trying to wade my way through slow moving traffic and I would see backpackers fumbling with their maps, with their heavy backpacks, watching the world go by. I really envied them.

In my trek however, quite a few fellow trekkers were backpackers too. So this was my chance to know more about them.

I travel too. But mine is all official travel, everything is planned, the flight, the hotel, the taxi, the clothes, every day, every minute, every second. Their travel was completetly opposite. Except for next destination, nothing was planned.

I had to get them talking.

"Travelling is a bug. Once you have it, its hard to stay in once place. In last ten months, I have been to over 30 countries."
"Fascinating. How did you plan this?"
"The basic plan is there was no plan. There are no rules. I took one way ticket to perth. I stayed at a hostel, met like minded people. Then plans kept happening. I met a group who was going to New Zealand, I joined them. After three weeks, I met a group of three girls, who invited me to go to Bali. It was great fun. Later I found this amazing deal on Euro rail so I went to Europe for three months, then China, India, Jorden....." I lost track of his travel.
"So you are always on the move", thats the best way I could summarise it.
"Yes. As a matter of fact, I haven't slept in the same bed for more than 4 days in last 10 months"
"Wow. Don't you get bored with staying at hostels, shared rooms, common toilets?"
"Sometimes I do. So I check-in a five star hotel for a couple of days. Sleep on soft bed, have sumptuous breakfast, hot water baths, go to spa, get pampered."
"Then?"
"Then I get bored with artificial smiles and forced courtesy and start missing my travel buddies. Then I get back to hostels."
"Don't you call home? Aren't they worried?"
"Yes, I do call once in a while. The unwritten rule for travellers is call home just at the right frequency. If you call less, it means you are having too much fun. If you call too often, it means you are in trouble, may be you need money. Family feels worried."
This was counter-intuitive to me. I mom felt reassured if I called her every day.
"So what is the next destination?"
"Well, I am going home after this."
"Nice. Are you missing home?"
"Umm. Not sure all I can say is I am ready to go home."
"So what is more relaxing, travelling or going home."
He smiled. He had never thought about it.
"I will think about it when I feel settled at home." He said.

This simple conversation was enriching in so many ways.

At home, I don't sleep well if I change my pillow. Sleeping in different bed every four days, is simply unimaginable.

The world around us is inherently uncertain. We put a lot of efforts and work hard to make it predictable. That is why life looks like a struggle. When you start enjoying uncertainties of life, world becomes home.