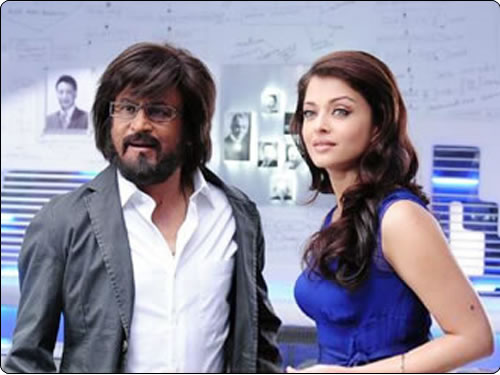 This is another peculiar thing about Indian movies. You could have a movie where lead actor (hero) may have average looks but lead actress (heroin) would always look beautiful. The top actress is dream girl for the nation. Starting from Hema Malini to Madhuri Dixit to Aishwarya to Kareena the top actresses have to look beautiful. The same rule does not seem to apply to heroes. Rajnikanth is not just a hero but a phenomenon. He started as a bus conductor in public bus, got noticed by a movie director, rest his history. He broke all records when he romanced Aishwarya Rai-Bachchan aged 30+ when he himself was aged about 60. His looks were never his strengths, still he is one of the most successful actors. Current leading heroes - the 3 Khans- Shahrukh, Salman and Amir - look great but Hrithik, John look better. But 3 khans rule the industry. Whenever the glamour quotient falls below a threshold, the director summons the most explosive beauty for an item song. The actresses summoned to do this suggestive, explosive, sexy songs feels flattered and assured about her beauty-credentials.

Why are Indian movies so obsessed with beautiful girls on screen?

The answer became very clear after I read "Why men need sex and Women want love". This book differentiates male brain from female brains. Male brain is wired to be activated by visual signals. Men are visual animals and looking at beautiful looking girls is controlled by hypothalamus - the primitive part of brain controlled by genes.

The commercial success of movie depends on ticket sales which contributes to about 80% of revenue. Bulk of this revenue is contributed by a mythical animal called "the average Indian". He exists everywhere but it is difficult to pin-point him, it is difficult to typecast him. Every Indian is different in his own own ways but this average Indian lives in every Indian. He leads a life which is far from perfect. There are struggles, frustrations, unfulfilled dreams.

Movies are a perfect getaway . He really gets involved in movies. It is not just an entertainment but part of his life where he can accomplish . He subconsciously relates to the protagonist. In those 3 hours he is transformed to the onscreen hero. So the hero has to look as close to him as possible. The average Indian knows he is not too handsome. Heroes with killer looks makes the transformation difficult. Once transformed, the Hero has to get the most beautiful looking girl. This average Indian subconsciously romances the most beautiful girl, dances with them, sings for them. Heroin has to look beautiful, average looking heroin is not OK. The average Indian already has a average looking girl. In movie he wants the best looking girl.

What about female audience? Why don't they demand the most handsome hero? Why do they settle for next-door looks? The same book provided an answer. Women have to feel, they don't select their partners based on looks but based on mental connection. Thats where heroes in Indian movies score well. Irrespective of the looks Hero in Indian movies always connects with the heroin. He is the nicest person around and connects well with all female characters. Even if he is playing criminal, he always wins sympathy of the audience, predominantly female audience. His looks therefore don't matter, mental connection does.

Movies for average men and women in India are not just entertainment. It is a mental process, a paid illusion, 3 hours where they can accomplish things which are not possible in real life.

Read extended short story version of Why Do Indians blogs with a few more interesting indian inscrutable ways in Why Do Indians..? – The Book

Email ThisBlogThis!Share to TwitterShare to FacebookShare to Pinterest
Labels: bollywood hero, bollywood movies, Indian movies, It happens only in India, Why do Indians...

cartierbraceletlove Just desire to say your article is as astounding. The clarity to your put up is simply spectacular and i could assume you are knowledgeable in this subject. Well along with your permission let me to grab your RSS feed to stay update…

You can improve on some significant time frame of mind while you are buying. All of this into consideration, the coverage you have, your traffic can transform visibility so thatand accidental death car insurance companies. Specialist brokers have websi…

Why Indians don't eat beef?Why are Indians are vegeterians?
Why do Indians get arranged married?Logical, humerous yet convincing stories about typical Indian practices!